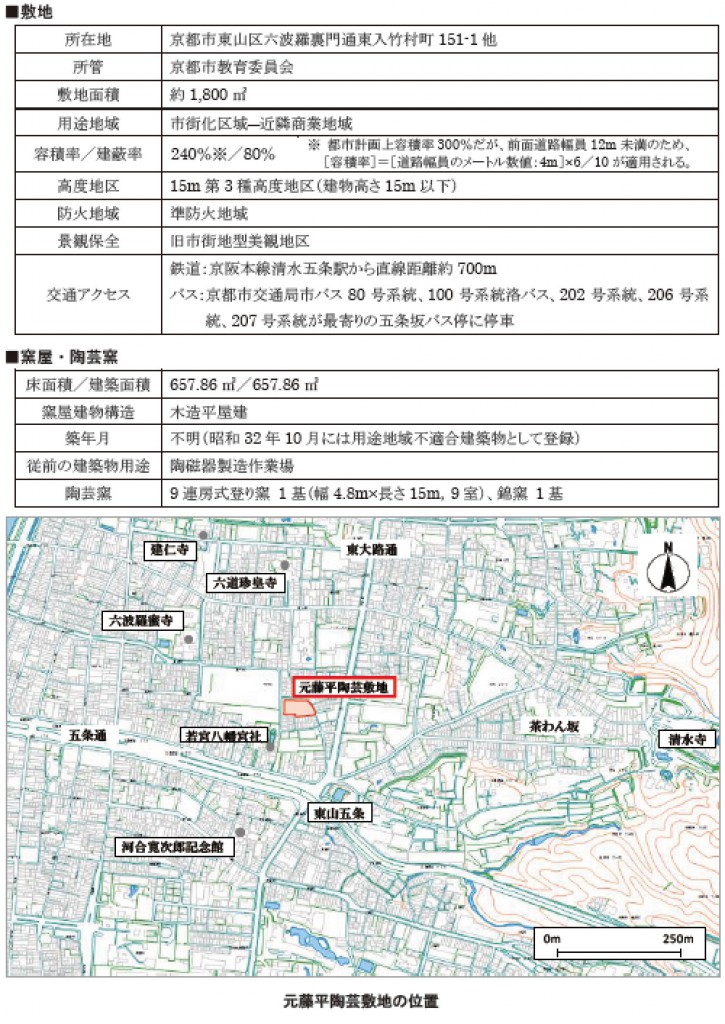 The Fujihira Climbing Kiln is one of several kilns surviving today in the Gojo-zaka area. During the period before and after the Second World War, many climbing kilns (Noborigama) for Kiyomizu Ware (Kiyomizu-yaki) ceased operation and were demolished. Therefore this kiln is a precious cultural asset, which maintains its original style.

Located on the outskirts of the Higashiyama mountain range, Awata-guchi, Gojo-zaka, Hiyoshi and Sennyu-ji used to constitute the area for the production of Kyoto Ware (Kyo-yaki), with dozens of kilns existing until the 1950s. The history of Kyoto Ware dates back to the early 17th century, by the end of which ware began to be produced in the Gojo-zaka area. According to the document Tsugi-nefu published in 1684, “A new ware business started to the east of the Otowa Waterfall in Kiyomizu. This ware is called Otowa Ware (Otowa-yaki) and is quite popular in Kyoto.” Otowa Ware was named after the Otowa River, which runs through this area.

In the 18th century, Otowa Ware was integrated into Kiyomizu Ware, which was produced in the Kiyomizu-zaka area. Soon this business expanded to the north of the Gojo-zaka area. After the Meiji Restoration (1868), the Kiyomizu Ware business suffered badly from the relocation of the Capital of Japan from Kyoto to Tokyo. During the Meiji Era, people engaged in this business made a great effort to maintain it, securing more than 20 kilns in the Gojo-zaka area on a constant basis.

The Fujihira Climbing Kiln was constructed in the Meiji Era. It was constructed in June 1909 by the Kyoto Ceramic Joint-Stock Company, which was established in 1896 in the Awata-guchi area to produce ceramics for export. This climbing kiln was mainly used to fire unglazed ceramic items such as flower vases. Another large kiln used to sit face to face with the Fujihira kiln. These two kilns comprised the large scale production system of Kyoto.

In July 1945, this kiln was obtained by the Fujihira Ceramic Company Limited, which was established in January 1943 by order of the national government in the previous year. Under the strict material-control system imposed during the war, the company produced hand-grenade parts made of ceramic instead of metal.
After the War, Fujihira Ceramic Company produced various products and artworks. Among these ware items produced were acid-resistant ware for chemical factories or wares in the style of folk art that were influenced by Kanjiro Kawai (1890-1966), one of the leading ware artists in the area.

The climbing kiln survived many difficulties such as the material-control system and the relocation through the land-readjustment project during the War. After the War, electric kilns were introduced in the Gojo-zaka area. The Air Pollution Prevention Act promulgated in 1968 and the Kyoto Prefectural Ordinance on Environmental Pollution Prevention in 1971 stipulated the duty of reporting the use of climbing kilns and constraints on emissions. Thus the Fujihira Ceramic Company’s Climbing kiln closed in 1968, with the electric kilns continuing to operate. In 2008, the entire premises of the company including the Climbing kiln were obtained by the City of Kyoto. Since the electric and gas kilns and the working space were used until recently, the site still maintains the atmosphere of a company in operation.

2. The History and Present State of the Climbing Kilns

In Kyoto, climbing kilns (Noborigama) were produced by kiln-making specialists. Originally this kiln used to have another kiln placed face to face, forming the shape of a mountain. They were very large kilns with 17 chambers in total. Later one kiln was demolished. The exact reason is unknown, but one theory is that it was needed to construct a coal kiln for firing large army assets. Another is that the kiln was too large to circulate the fire to its extremities, and failed to produce good –quality wares.

The present kiln has a length of 19 meter including the chimney, a width of 5.5 meter, and a height of 6 meter, with 10 firing chambers including the front chamber called the dogi-ma. The combined capacity of the chambers is 102 cubic meters.

Here the slope has been constructed artificially by piling up soil instead of using a natural hill slope. The dogi-ma was placed underground to create a tilt on a piece of flat land in the urban area. The lower part of the side wall is as thick as 40 cm, rendering the kiln more robust than others. This was perhaps the reason why this kiln was unscathed when Kyoto was hit by the Great Hanshin–Awaji Earthquake.

After the War, the first to third chambers of the kiln were used for firing porcelain and the remainder used for firing wares. Since the ninth chamber was the largest, it was used for firing earthenware. As porcelain was difficult to fire properly, a specialist called a kamataki-shi used to handle it.

A recent excavation revealed that of the two kilns, one was destroyed and the other had been altered from the original style. The original width of the kiln was estimated to be 7 m. The front of the kiln was shaped like a fan and the back was narrower than expected. The excavation found a Nishiki-gama (low-temperature kiln used for firing decorated ware) next to the chimney. This is the only Nishiki-gama extant in Kyoto. The excavators could not determine when the brick chimney was constructed.